Update Dec 20, 2019, I recently learned this phenomenon has a name, Jevons effect.

The Boeing 787 "Dreamliner" is shipping to customers, and the media is using ridiculous sentences like:

Some 50 percent by weight of the 787 airframe is lightweight carbon-fibre composites that could, Boeing says, help reduce fuel costs by 20 percent.

If it's half the weight of a huge aircraft, it isn't really lightweight. I'm going to compare the 787-8 with the 767-300, as I see them having similar capabilities for airlines...with some notable exceptions, of course.

All information gathered from wikipedia, for what it's worth.

That bottom estimate is not necessarily representative because it will probably not generally fly at maximum weight.

First, they are very similarly-sized airplanes. They carry similar passenger loads (though Boeing is not currently advertising any of the high-passenger-density models yet that will be used by the likes of American Air). The 787 is overall a little larger, and it weighs a lot more. Which puts the lie to this lightweight composite issue.

And as you can see, they seem on the surface to have essentially identical fuel efficiency. Which puts the lie to this efficiency thing that Boeing is constantly blabbing about.

So what is really different about the 787? For the same fuel efficiency as the older aircraft, they are giving you a larger airplane, with a much larger fuel tank and much larger range.

There's another difference that seems pretty significant to me: the 787 wingspan is much larger. Yet its wing area is only slightly larger, so its wings are actually not as long (front-to-back) as the 767 wings. So it gets a higher aspect ratio. High aspect ratios lead directly to better lift-to-drag ratio. It could be any number of things, but I would guess that the important factor is that the carbon fiber is stronger, not that it is lighter. The stronger wing spars are what enable the much wider wingspan.

So the 787 is pretty cool -- roomy cabin, extra cargo at no extra cost. And phenomenal range. And I'm sure a lot of the new "features" such as quieter operation and no longer relying on bleed air will be a real impressive experience. Just don't let anyone tell you it's lightweight.

On another note, check out the 787 cockpit: 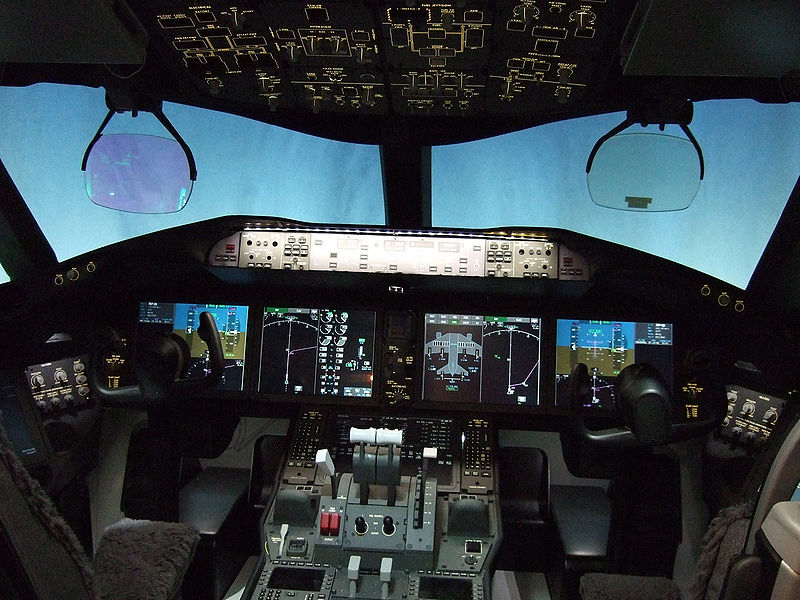 For comparison, here is the Airbus A380 cockpit: 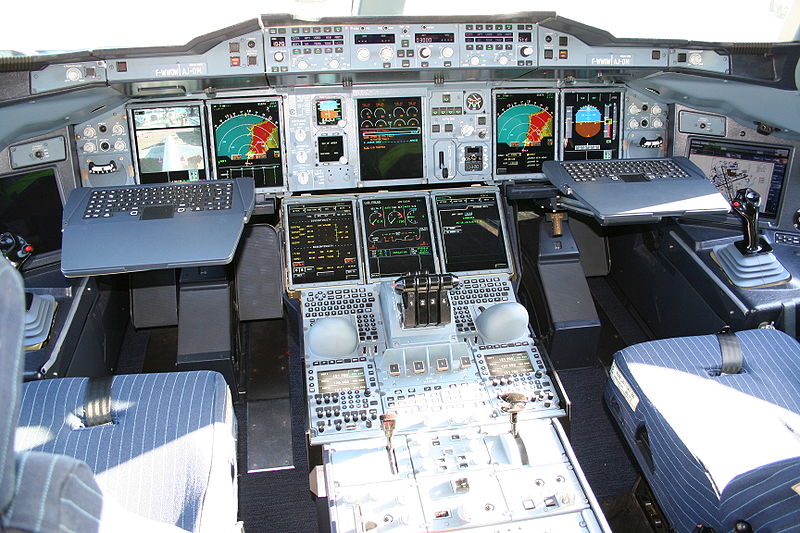 To say that Airbus is encouraging a psychological reliance on the technology in the pilots is a bit of an understatement.